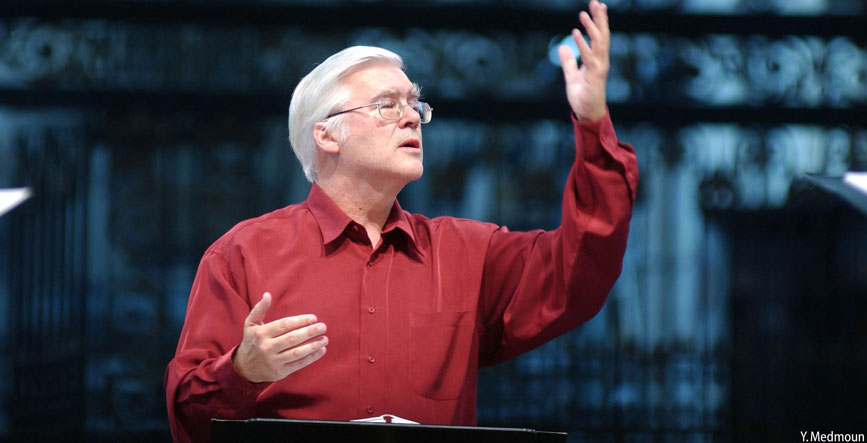 Graham O’Reilly has always divided his time and energy between performance and research. While studying musicology at Sydney University, he also made his débuts both as tenor soloist in Messiah in the Sydney Town Hall, and as conductor with staged performances of Marco da Gagliano’s opera Dafne, the subject of his first thesis. He came to London to work for a higher degree, but found himself sidetracked into performance, both as a concert and session singer, and as conductor of various ensembles, notably The Restoration Musick and Psallite, both specialising in 16th and 17th century English music, which reflected his research interests at that time.

His invitation to join the Groupe Vocal de France, an ensemble of 12 soloists performing contemporary music, marked a new direction. But the lure of earlier music, and of the research associated with it, soon drew him into the creation in Paris of the Ensemble William Byrd, with a repertoire centred primarily on vocal music of the 16th and 17th centuries from the whole of Europe – not only that of the mainstream (Italy, France, Germany) but also from Portugal, Spain, Flanders, Bohemia, Poland, Central America and of course England. He has since conducted the Ensemble throughout Europe and the Americas, and directed a series of benchmark recordings, notably the Allegri/Bai Miserere, Domenico Scarlatti’s Stabat mater a 10, Charpentier’s Extremum Dei judicium and Carissimi’s Historia Jephte.

The Ensemble allows him to express his musical and musicological beliefs in concrete form, particularly concerning the overriding importance of text in determining the vocal gesture, consideration of the psychology of singers through the ages, and the search for the particular beauty which comes from the mixing of particular vocal timbres. He sums up his work with the Ensemble William Byrd as follows:

“Interpretation of old music requires, firstly, an awareness of the musical and social context of each work, and a real effort to recreate what the composer expected to hear. This “musicological” base is irreplaceable. But to communicate a musical work in the 21st century, it is necessary also to tease out its “universal” nature, so it can speak to today’s listeners, each of whom comes to it with his own cultural experience. In vocal music, this “interpretation” starts with the text and its relationship with the music, a relationship which evolved considerably between 1450 and 1750. Any performance, in concert or on record, stands or falls by the extent to which it makes apparent the relation between the words and the notes, particularised in the context of its period, and universalised into ours. Only then can we be moved by it.”

Apart from his activities as director of the Ensemble, Graham O’Reilly gives workshops in choral direction, master-classes on early repertoire – most recently in England, Sweden and Portugal – and involves himself in activities which further the musical education of the wider public of all ages, including the direction of an amateur choir, the Ensemble Vocal de Pontoise. Among his recent invitations as guest conductor : the Choir of Radio France (17th century Mexican music, and a programme devoted to his fellow Australian Percy Grainger), the Choir of the Festival of Ambronay, and the Maîtrise de Caen. Insofar as his performance schedule allows, he stays in touch with current musicology, above all that related to historically informed performance practice, and continues research on singing techniques in Western music of all periods, at the moment particularly those of the 19th century for his forthcoming book on the Allegri Miserere.