Here is a selection of concert reviews. Record reviews will be found in the discography. 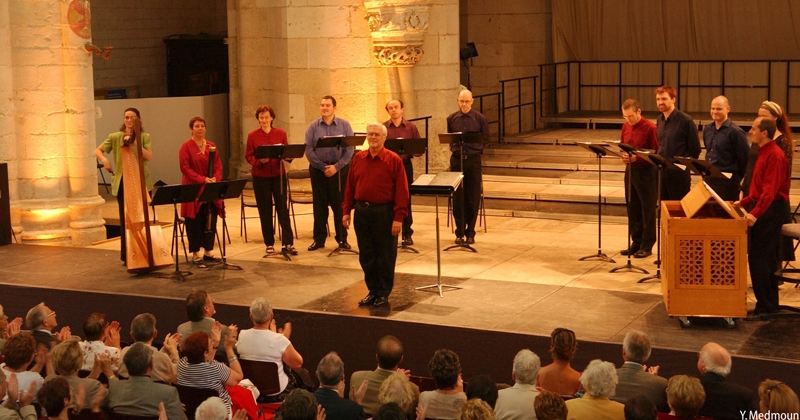 “Guided by their founder Graham O’Reilly, the Ensemble William Byrd recently tackled the fascinating repertoire of 16th and 17th century contrafacta. In so doing they showed how Monteverdi was able to transpose his humanism into an equally stimulating sacred context, with a real exposition of the power of both texts – secular and sacred – set to music first published in the 4th and 5th madrigal books (1603 and 1605).

To be precise, the contrast between the secular originals and the sacred versions made by Canon Coppini – an ardent supporter of the man from Cremona – was fully visible in the sensitive approach of “the Byrds”, which went well beyond simple word-painting: a real adaptation from amorous description to religious feeling, both by style and by sound. A few examples of their expertise: the metamorphosis of the voluptuous Si ch’io vorrei morire, transformed by Coppini into the fervent O Jesu mea vita; the transformation of the spiralling chromaticism of Piagne e sospira into the almost liturgical lamentation in Plorat amare.

These brought us to the highlight of the evening: the confrontation of the Lamento d’Arianna – here given with a mix of Monteverdi’s own version for 5 voices (from the 6th book of madrigals of 1614) and the original solo – and the Pianto della Madonna for solo and continuo: without a doubt the most symbolic of the contrafacta published by the composer in his Selva Morale e Spirituale.

In the Lamento, in particular, the flowing and agile voices of the Ensemble found the path of true expression, carefully guided by Graham O’Reilly like a real Italian. He did not forget to bring us back to his origins, however, with music from Elizabethan and Purcellian England: a masque by Matthew Locke for Psyche, and particularly a delectable bouquet of Anthems and Spiritual Songs by the Orpheus Britannicus, which ended the evening in triumph – an evening out of the ordinary in a place as well adapted for such evenings as it is for the discovery of pleasant musical surprises.”
Roger Tellart (translation)

“The Ensemble William Byrd, from France, know how to sing in such a way that the worst heathen could be converted by a motet or a Salve Regina. Their voices glide peacefully through the room as if seeking to fill the empty spaces without colliding with one another: the harmony of the spheres in chamber form.”
Aftonbladet, Stockholm Early Music Festival

“The German church was filled with a beautiful choral colour, at once homogenous and indivualised, with a steel edged precision of the kind one thought was unique to our Swedish Radio choir”.
Dagens Nyheter

“As the ensemble expanded from trio to double choir the audience’s appreciation increased overwhelmingly for the EEWB who turned out to be a real catch for the festival.”
Svenska Dagbladet

“ …expressively crafted, capricious and theatrical, the effective use of dark and light vocal colors providing contrast, the power of words being ’the master of the harmonies.”
Pamela Hickman

“the second half of the concert was entirely devoted to the Stabat mater of Domenico Scarlatti … in which we could feel throughout the Cathedral the outstanding technical attributes and great expressivity of each singer, all united into the  same conception, magnificently conceived and conducted by Graham O’Reilly.”
El Punt, Catalunya

“Three decades before, contemporary with the birth of Bach, Henry Purcell’s music — its passions much colored by his studies of Italian music — also acquired much of the power to disturb and to amaze that would later come to Bach in a different world. At the First Congregation al Church in, as you might guess, one of the “Historic Sites” series, which remains unrivaled anywhere else, the small group (five voices plus organ), Paris – based, that calls itself Ensemble William Byrd turned Purcell and his French contemporary Marc-Antoine Charpentier into magic on a recent Sunday.

The Purcell group, anthems composed for the newly restored Chapel Royal and most of them from the composer’s 20s, simply throbbed with dramatic force. From Italy he had absorbed the power of dissonance and sudden change. The force that we know in his later works like Dido and Aeneas is already here in, for example, the short three – voice drama Saul and the Witch of Endor, a scene in florid, Italian style in which the troubled Saul, on the eve of battle, begs the Witch to summon up the spirit of the dead Samuel. Under the leadership of the Australian-born Graham O’Reilly, the five Ensemble singers, French and with accents charmingly blended, transformed the music into an audible translation of the great rose window in the apse behind them.”
Alan Rich, Los Angeles Weekly, 15 Novembre 2006

“The concert was just lovely: beautiful voices, perfect intonation, eloquent French-accented Latin, and fantastic music. What more could anyone want?”

“A majestic opening to the Festival by the Ensemble William Byrd … the singers made the huge edifice sing, bringing an intense emotion to the public, by means of their voices, as supple, celestial – mind-blowing -  as can be imagined.”
Le Midi Libre (translation)

“The music, which dates from the middle of the 17th century in Rome, transformed the large public into an intense musical emotion. Only rarely can an audience have been more attentive and more moved, particularly in the second half.”
Le Dauphiné Libéré (translation)

“The ensemble’s sound is totally clear, especially the mixture of the voices and strings. Together they create a rounded and lively aural impression. We were fascinated for the whole concert, all the way to the end.”
Westfälische Nachrichten (translation)

If the Ensemble William Byrd has distinguished itself so far in the repertoire of the pioneers from across the alps (Monteverdi, Gabrieli, Cavalli) and of the masters of the English Golden Age (Byrd, Gibbons, Purcell, Handel), their most recent concert in the church of Saint-Sévérin was a very pleasant surprise for lovers of Charpentier.

It was a voyage of reflection and emotion which revisited with the necessary understanding certain gems of his religious output, such as the Trois Méditations pour le Temps de Carême and that other masterpiece of suffering, Le Reniement de St Pierre, both of which are classified as Histoires sacrées.

Throughout, the pupil Charpentier shows himself the equal of his teacher Carissimi in his visualization of the different episodes of the story, to the point that one may classify his work as true liturgical theatre. To be more exact, the dialogue with the self becomes influenced by the striking images of the story, the fruit of a profoundly baroque imagination. In this way, the composer reproduces the human aspect emphasized by the founders of oratorio, an aspect totally understood by Graham O’Reilly and his small team. As much at ease among the outpourings of the soul as when  expressing the emotional force of words, the six singers (both men and women), accompanied by a continuo of chamber organ, theorbo and bass viol, were engaged in a real exercise of rhetoric, which was also evident in the touching Nativitatem Domini Nostri Jesu Christi and in the Salve Regina for three dessus; showing Charpentier as the master of musical preaching, where the perceptibly sensitive gesture is associated with  the uplifting act of prayer.
Roger Tellart, La Lettre du Musicien, mai 2004 (translation)

The Theatre of Arezzo, Italy, 2003
Monteverdi and Charpentier

Last Thursday evening, in the Petrarch theatre, the Ensemble William Byrd not only recreated beautiful and rarely-heard music by Monteverdi, Charpentier and Rigatti, but also gave us the real taste and spirit of the period, with their careful mixing of timbres, rhythmic mastery, and fine balance between voices and instruments.
La Nazione (translation)

“The best part of the evening was the admirable interpretation of Scarlatti’s Stabat mater, in which the Ensemble showed the real measure of its skill and talent.”
Hebdo-Vendée (translation)